Created 18-Aug-10
Modified 11-Jan-21
Visitors 319
181 photos
Stock images of The 6 Metre worlds 2009 in Newport Rhode Island.
Racing was held inside Narragansett Bay just north of Gould Island where the fleet was met with strong wind and tide, but also on the first days sailing outside Newport Harbor in light conditions.
The International Six Metre Class is a class of classic racing yachts. Sixes are a construction class, meaning that the boats are not identical but are all designed to meet specific measurement formula, in this case International Rule. At their heyday, Sixes were the most important international yacht racing class, and they are still actively raced around the world. "Six metre" in class name does not, somewhat confusingly, refer to length of the boat, but product of the formula; 6mR boats are, on average, 10–11 metres long.
The International Rule was set up in 1907 to replace numerous handicap systems which were often local, or at best national, and often also fairly simple, producing extreme boats which were fast but lightly constructed and impractical. The Six Metre class was not the smallest rating established under the rule, but was nonetheless the most popular, and they were chosen as an Olympic class in 1908. However, it was not until revision of the Rule in 1920 when the Sixes really became a popular international racing class. The 1920s and '30s were 'golden age' of the International Rule boats and Sixes were still the most popular class, attracting top sailors and designers to compete for prestigious trophies such as Scandinavian Gold Cup and Olympic medals. Alexander Robertson and Sons Ltd (Yachtbuilders) produced a total of five 6-Metre yachts between 1921 and 1953. In 1937 their young naval architect David Boyd designed the sleek 6-Metre racing yacht Circe, which was described by many as the most successful racing yacht produced at the yard. Mr J. Herbert Thom, one of the Clyde's best helmsmen sailed the yacht with tremendous success in America in 1938 and brought back the Seawanhaka Cup, which was successfully defended in home waters the following year. In later years Circe represented Russia in the 1952 Summer Olympics. However, Sixes were also criticized as having become too expensive and towards the end of 1930s they became more so, making the class too exclusive, as under what is known as the Second International Rule (1920 - 1933) the yachts had gone from being less than 30 feet in overall length to being almost 40 feet. By 1929, 5 Metre class was becoming more popular as a cheaper and smaller alternative for Sixes, but the final blow was creation of International 5.5 metre class in 1949. 5.5 m soon replaced 6mR as the premier international racing class, and after 1952 Helsinki Olympics Sixes were dropped from Olympic regattas. The Gold Cup was also transferred to 5.5 m class from 1953 onwards. Despite this, the class continued to exist, and new boats were made utilising the newest contemporary technologies, although sparingly. During the 1980s, many old sailboat classes experienced revival of interest and Sixes were at the forefront of this development. The Class has undergone a renaissance which has continued to the day, with many old yachts restored or rebuilt to racing condition, and 6mR competition is once again thriving. Performance differences between classic and modern era Sixes are usually small and they can be raced together. The 6 Metre Class is one of the potential Vintage Yachting Classes for the 2012 Vintage Yachting Games. Several variations of the rule have been developed to meet specific criteria. Perhaps the best known is International One Design class, which was designed by Cornelius Shields and based on the 6mR boat Saga. The 6 Metre World Championships are biennieal international sailing regattas in the 6 Metre class organized by the International Sailing Federation and the International Six Metre Association. Most titles has Norwegian sailor Pelle Petterson won, with three titles between 1977 and 1983. Second most titles have Swiss Bernard Haissly and Swedish Carl-Gustaf Piehl, with two. The most championships has been won by Swedish sailors, eighth editions, followed by Swiss sailors, three titles, and sailors of Canada and the United States (two each). The 6 Metre was an Olympic class from 1908 to 1952.
Categories & Keywords
Category:Sports
Subcategory:Water Sports
Subcategory Detail:Sailing
Keywords:Fort Adams, 6 metre yacht, Bay, Fort, Island, Metre, Narragansett Bay, New England, Newport, Rhode Island, USA, boat, classic boat, classic boat, classic yacht, design, fleet, images, library pictures of wooden yachts, regatta, sail, sailing, stock, stock sailing images, teamwork, wooden yacht
© SAILING IMAGES | NAUTICAL AND WATER | BOAT PHOTO LIBRARY 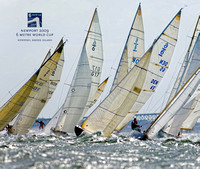